I love this game. It’s my personal favourite because I love spatial puzzles. We picked up Labyrinth when N was 4 because he was really interested in mazes. The level of spatial thinking and visualisation of what will happen when parts of the maze moves means it’s definitely not one to play when kids are a bit tired. But it’s still fun to play with young kids even as they are developing this type of thinking. It’s easy to set up, with simple rules that can be adapted by age, and it’s a maze, with moving walls! What kid (or adult) doesn’t love a good maze?!

The game itself is very simple. Randomly place all the maze tiles on the board. There will be one tile left over. This will be the pusher. Players take it in turn to slide the pusher tile onto the board from any edge, thereby pushing a row along and changing the configuration of the maze. They then move their player along the paths attempting to find one of the items in the labyrinth. With each push a new tile drops of the board and becomes the pusher.

A set of item cards dealt to each player at the start of the game determines what players have to find. Older players receive theirs face down, taking the top card and trying to land on that item tile before seeking out the next item. Younger children receive their cards face up and can can collect items in any order. This variation works well for mixed age play because as an adult you can see what your youngest is aiming for and occasionally make a suggestion or manipulate the route in their favour. It’s also fun when multiple older players are playing at the same time because they can simultaneously be trying to guess and block each other’s routes. There is therefore multiple levels of play to be had in a mixed age session.

For an adult seeking out one treasure at a time can get very tricky, especially as N loves to manipulate the start so our playing pieces are blocked in. This gives the game enough mental challenge for it to be genuinely engrossing when playing with even the youngest children. For me this is one of the appeals, each player is primarily playing against the labyrinth, trying to figure out how to rotate and manipulate the tiles to create a path through. The moves other players make often have consequences for you but the game is not openly combative. If playing with mixed age children it’s also possible to adapt the difficulty for each child by dealing more or less item cards (but we’ve never needed to). Reducing or extending the number of items to collect also manipulates the game length. We usually play 5 cards which feels about right for the younger primary age and means we can often play 2 or 3 games if N really wants to win, a game finishes too quickly, or when introducing it to new players.

As a parent, I like the potential of this game to contribute to STEM skills – it encourages problem solving, and visual and spatial reasoning (mentally thinking about how an object will move, rotate and relate to another). As a gamer, N is also developing his strategic thinking, the type of forward planning needed for strategy games. Labyrinth therefore falls into that subset of “games to grow into”. The more we play, the more N’ s ability to play develops. I’m frequently impressed when N confidently slides a tile and reveals a route through the labyrinth I hadn’t spotted.

It’s easy to pick up and play straightaway without complicated rules to follow and there’s enough thinking involved in terms of planning your moves or even blocking others to keep the game interesting over consecutive plays. It’s also that rare thing, a game that’s just as good played with two as it is with multiple players. If like me, you love logic puzzles, then you can’t go wrong with this family game.

There is also Labyrinth Junior which has less tile pieces (smaller board), but like many junior versions of games, kids grow out of them quite quickly and although perfect for kids of a similar age playing together, they are often less suited to mixed age play as the challenge just isn’t there for the older kids/adults. I’d consider the junior version for introducing the game to preschoolers, maybe for Little Miss when she’s around 3 years, especially as there are themed character versions. 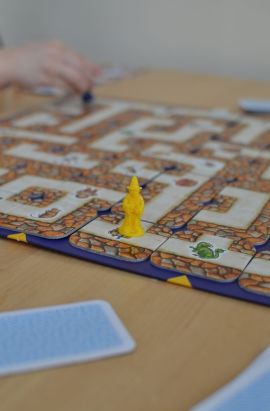