Rat-a-tat-Cat is a fun, quick hand-building card game that’s great for mixed age play. The aim of the game is to build the lowest hand of four cards, and then go out first in order to stop the game before your opponent has built a lower hand. But there’s a twist. Your hands are face down throughout the game so you’ve got to rely on your memory to keep track of what you’ve got. The game is officially aged 6+ but comes with a suggested game variation for younger players that works well with children from around 4 up. The more the kids play, the more sophisticated they will get at both remembering their own cards and assessing the probability of other players’ hands. This should mean Rat-a-tat-Cat will have a long shelf life that continues to challenge the kids as they grow.

Players are each dealt 4 cards face down. They are allowed to peek under the two outside cards at the start of the game. They then take it in turns to draw one card from the central deck or discard pile and replace their face down cards with more favourable ones. Low scoring cards feature quirky images of cats and high scoring cards are rats. This visual cue makes it very easy for younger kids to follow the game even if they are not completely competent with their number line.

There are also three further action cards which are played when drawn from the central deck: ‘peek’- which allows a player to look at one of their face down cards; ‘swap’- which allows a player to swap one of their face down cards with an opponents face down card; and ‘draw 2’-which let’s you draw two further cards and choose the one you want to use in your hand. Younger kids are not usually aware enough of which cards other players have been putting down to make the best use of ‘swap’ but it certainly adds a spanner to the works when they take you best cards anyway!

In the younger variation, the two outside cards are dealt face up and remain that way throughout the game even when replaced by other cards. This reduces the amount of memory strain required to keep track of your hand but also allows younger players to see what other players have and what they might need to potentially win. This is an important step when introducing the game to younger players because it encourages them to think about other people’s hands. N could certainly play all cards face down now (he’s nearly 6) but I really want to encourage him to keep building those skills of watching other players (when they swap out their face down cards, how low their face up card is) and use that knowledge to assess his own hand. This kind of reasoning is a great skill to develop for many future games.

Some basic maths addition is required to calculate final scores but no one really sums their hand while playing – kids are generally just aiming to swap out their cards for the lowest they come across. To encourage N’s adding skills we gave him an abacus so he could be involved in the final scoring at the end but he soon found it unnecessary.

Being a quick little card game it’s great for travel, especially when you’re looking for something with a bit more thinking than similar fast-paced card games like Too Many Monkeys or Dobble. The game can accomodate up to 6 players and because the rounds are quick there’s plenty of time to play multiple games and potentially have multiple winners (always a good thing if the kids still get a bit despondent when loosing). Plus there’s enough luck of the draw involved, that N has been able to compete equally with us adults since he was 4 by just building his own hand and not really paying attention to our cards. For N the game clearly appeals because he likes the novelty of trying to remember his face down cards and going out fast enough to scupper our chance of building a good hand. There’s also that moment of anticipation and surprise as everyone’s face down cards are flipped at the end and players finally get to see if their low card hand is going to be enough. With the option to shift to having all cards face down in future, I can really see Rat-a-tat-Cat being a game that we keep coming back to over the coming years. This is the type of game Gamewright does best – it’s easy to pick up and play straight away with the perfect balance of skill and luck to even out the playing field but keep it interesting for adults and older kids. Definitely a keeper! 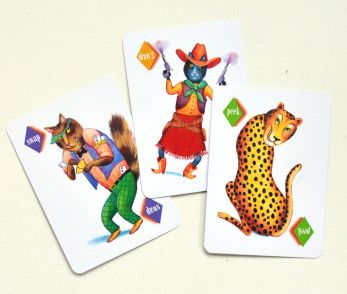