Outfoxed is a great introductory level cooperative deduction game for very young kids. The artwork is beautiful and the theme, a bunch of detectives trying to figure out which fox is the thief before he or she goes to ground, is appealing and easy to grasp. We added this to our collection when N was about 3 and a half. He was really interested in detectives and solving ‘mysteries’ at the time but wasn’t capable of the deductive reasoning necessary for games like Cluedo. Outfoxed was just right, and with a little adult guidance to remember what ‘clues’ we had collected, he soon picked up how to eliminate suspects on his own.

In the game all the players are detectives working to uncover suspects or moving to clue locations in order to eliminate suspects. But they are also racing against the fox thief who moves ever closer to his or her escape hole when players don’t achieve their goals.

The game board is set up with all but two suspect cards face down around the outside edge. A theif card is then selected and inserted into the red plastic ‘clue reader’ without being seen. Using three dice, that can be re-rolled twice more, players attempt to roll either three ‘eye’ symbols that will allow players to turn two suspect cards face up, or three (or more) ‘paw’ symbols that allows ‘detectives’ to move a corresponding number of spaces around the board to get to clue spaces. Players must say whether they will roll for clues or suspects before they roll the dice. If they don’t achieve their roll, the little fox figure moves three spaces along their path towards home.

When players move to a clue space (indicated by a giant paw print on the board) they are given a clue disc picturing an item of clothing or accessory. There is a great little mechanism for reading the clue discs. Prior to starting, the thief card, featuring the name of the thief and a series of red and green dots, was loaded into the clue reader. These dots correspond to notches on the clue discs – so when you get a clue (with a picture of a hat, monocle, cane or similar on it) simply pop the disc in the space on the front of the clue reader, pull out the slider and either a red or green spot is revealed indicating if the thief is or isn’t wearing/ holding the item. This mechanism is simple but totally captivating for young children. Players then remove visible suspects based on the clues that have been uncovered so far.

Eliminating suspects does often require remembering previous clues and there are simple strategic decisions involved in either choosing to move detectives to clue spaces or turning over suspects. The difficulty of the game can be gradually increased by moving the fox more spaces when players fail to roll what is required. But overall gameplay is pretty straightforward.

This is a gentle cooperative game that’s a level up from Hoot Owl Hoot in that there is some deduction and remembering required. But it’s still very simple to set up and play. What I like most is the ‘feel’ of the game, the artwork is fresh and the characters are quirky. Of course there’s a lot of luck involved in as much as movement is based around rolling dice but it’s pleasant to play which makes it stand out among the usual noisy, repetitive games for the preschool age group. In terms of cerebral challenge it is limited and I expect N will soon outgrow it, but for now (nearly 6) he still enjoys playing it, in fact we played it a few days ago. I think the main appeal for him is the satisfaction that comes from working out who to eliminate and that ticking clock tension as the fox gets ever closer to home. He does also love that clue reader! I think there’s enough in the theme and game play to keep an older siblings interest for at least one game on family game night, but it is squarely aimed at the preschool/ early primary age bracket (officially aged 5+). For now it has a permanent position on our games shelf because we keep going back to it when we’re looking for an engaging but low key game that delivers the rewarding satisfaction of outwitting that wily fox. 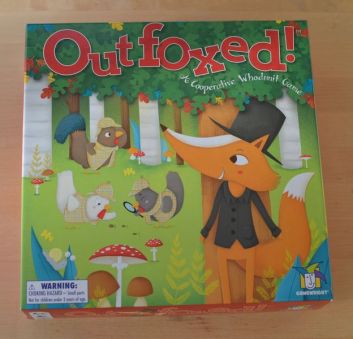 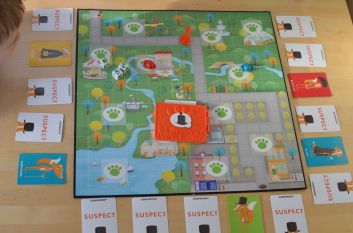 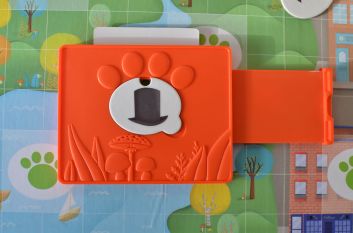