I waited for what felt like a long time for N to be old enough to play Forbidden Island. In the end we introduced it not long after he turned 5.

Forbidden Island is a fantastic cooperative game by the same creator as Pandemic. The premise is perfectly pitched for kids: find the treasure and get everyone out before the islands sinks into the ocean. Each player has a different character with different skills so working together to shore up islands and get people to treasure spots is a must. Like most cooperative games, the tension comes in the form of a ticking clock, in this case rising tides and disappearing islands.

How it plays:
The ‘island’ is really an archipelago made up of 24 individual island cards. As the water rises, cards are drawn from a flood deck indicating which islands are starting to sink. The corresponding island card is turned over to reveal a washed out image of itself. If it is drawn from the deck again the corresponding island is removed from the archipelago. Players must navigate their pieces hopping from island to island.

Players start the game with 2 treasure cards. They need to be holding four of the same type and be standing in the corresponding island to claim that treasure. There are four treasures to collect. On each turn a players decides on 3 actions, chosing from either moving their playing piece, shoring up a sinking island (by turning it the right way up), giving treasure cards to another player standing on the same island, or ‘finding’ treasure by producing a hand of 4 treasure cards that match the island they are standing on. After their 3 chosen actions, players draw two more cards from the treasure deck discarding any once their hand reaches a maximum of 5 cards. At the end of their turn the player (or a designated person) draws flood cards from the floor deck to find out which new islands are starting to sink. How many are drawn depends on wether you are playing beginner or more advanced levels but usually two or three cards. Throughout the game this number increases, building the urgency of finding the treasure fast.

Like Pandemic there is a clever mechanism to really ramp up the tension. Hidden among the treasure deck are ‘water rising’ cards. If these are discovered, the level indicating how many flood cards are to be drawn increases. When a ‘water rising’ card is found, the flood discard pile (corresponding to islands that have already been turned over once!) is picked up shuffled and replaced face down on top of the flood deck. Play then continues and the player ends their turn by drawing from the flood deck. Of course now, unless players have been shoring up islands, it’s pretty certain islands that have already started to sink will be redrawn, and consequently removed from the archipelago. Once disappeared an island is gone for the rest of the game.

The game is won once all treasure has been found and all players reach the helicopter evacuation point. But there are lots of ways to loose this game: if a player is on an island that sink and there is no other next to it they can get to, if islands with unclaimed treasures permanently sink, if ‘fools landing’ the helicopter evacuation point sinks, if the rising water level reaches its maximum height.

Forbidden Island is a really tense game. As islands start disappearing it can become nail bitingly close as to whether all the treasure will be found and everyone helicoptered off the island in time. On many occasions we haven’t managed it! But because it’s a co-operative game, everyone is working together so we are sharing in defeat or victory. I love that! It creates a strong family team, fighting dangers and going on adventures together.

Playing with N from such a young age meant he was only beginning to develop his critical decision making skills, so we pointed out moves he could potentially chose from and highlighted any immediate dangers he might have missed. Now at 6, N more confidently make his moves and contributes to group strategies. I think kids around 6+ will really appreciate Forbidden Island because they will hold their own in group discussions and more confidently suggest actions. So if you are yourself an avid player, don’t let the 8+ age recommendation stop you involving younger kids. In a mixed age family game even a 5 year old will happily feel involved. But as with all co-op games, they’re only fun as long as no single player is allowed to dominate and start ordering others around like their own personal minions – something to keep an eye on if playing with mixed ages (and with bossy adults!).

Forbidden Island is one of N’s favourite games, he loves being immersed in the tension of that sinking world. But certainly for some younger kids it might be a little too stressful if they are the type to get overly invested in a game. Forbidden Island is a fantastic addition to any family games collection and should guarantee many years of play to come.

The game takes about 20 minutes to play and can accommodate 6 players but because it’s cooperative and based on decision making, extra people can be added as part of ‘teams’. 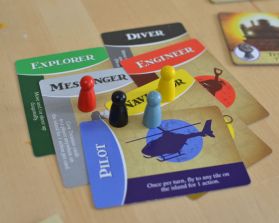 One thought on “Forbidden Island – a nail biting co-operative game for kids.”

Who wouldn't want to be these go getting women?! We are loving Ghostbusters: Protect the Barrier right now. We are big Ghostbusters fans but this isn't just a movie spin off board game without substance. If the components look familiar it's because it's an adaption of the popular Ghost Fighting Treasure Hunters. But from what I can gather it adds the unbeatable Rowan figure which creates big chain reaction ghost cascades as he moves through the rooms. Ghostbusters is a co-operative game where you battle as a team to defeat ghosts and collect paranormal energy device tokens scattered across rooms in order to save the day. It has the ticking clock pressure of many co-ops in the form of dice roll card combos that add ghosts which get bigger and spill into adjacent rooms if you don't deal with them quick enough. It's fun, tense but also reasonably fast to play. We usually get in a couple of games a session and as long as the kids are ok with "ghosts" then because you work as a team young kids can easily be incorporated, but to take a lead I'd suggest ages 6+ Plus the components are just great, especially those cute little white ghosts. It's my favourite of the family coop games we own. #ghostbusters #familygamenight #familygames #familytime #boardgamegeek #cooperativegames