N goes through stages of loving Star Wars but it’s been challenging to find a game that’s fun for his age group (currently age 6). Star Wars: Empire versus Rebellion is not perfect but it does meet that occasional Star Wars need and from a parent perspective it’s really great for maths practice.

At its core Empire versus Rebellion is a Blackjack style push your luck card game. Players compete in a series of battles over event cards, attempting to get as close as possible, but not go over, the total value needed to win that particular card. To make it more interesting, each event card sets a limit to how many cards a player can use to reach that value. For example when fighting for “Control of Endor” players can use only 2 cards to score 9, while players can use up to 6 cards to reach 21 in “Duel on Cloud City”.

Each player has their own deck (Empire or Rebellion) comprising resource cards that include key characters, valued between 1 and 6, which are used to build a player’s total for each event battle. The resource cards have various special effects which can be used during the battle, such as removing cards played by your opponent, and once resource cards are spent they can be revived again through tokens collected from winning previous battles. However, some event cards also nullify the use of certain resources when building your total value – for example in Duel on Cloud City only the character powers of Darth Vader and Luke Skywalker can be used during that battle.

Players take it in turns to do one of three moves: either draw a card from their deck and add it to their hand (face up) to start building the value required to win the event card; perform a special effect by using a resource card in their hand; or when happy with their total value, or unable or unwilling to play any more cards, they pass. Once both players have passed in succession, the winner of the battle is determined.

The final twist in the game is that at the start of each battle each player secretly chooses one of six strategy cards. These cards are only revealed when determining the winner of each battle, and can include strategies such as who ever loses the battle actually wins, or adding 2 additional points towards calculating the final battle score. These little twists do make the game much more interesting but can be a lot to learn all at once and younger players are only going to start to get fluid with the various strategies and aspects of the resource cards after a good few games.

Each battle event card is worth various victory points and the first player to 7 victory points wins. We often play first to 5 victory points if we want a quick game, as some battles (those that allow multiple cards in play) can last a long time, but other battles are over in a couple of turns.

I can’t say I love this game, but it’s not a chore to play either. The more you play, the more familiar you get with the cards and possible strategies. For example N has realised he can can keep reviving and re-useing the Darth Vader card to get rid of some of his high scoring cards if he’s gone over the target value. When you’re playing a big multi card battle, it can also get quite involving, calculating how to use up resource cards to attack your opponent and revive other cards that allow you to remove cards from your own hand.

The Star Wars theme does feel a bit added on though and the special abilities don’t really resonate with the characters they represent, but N enjoys playing multiple head to head battles over each event card and particularly likes the strategy card reveal at the end- even if he is not great at bluffing yet. The process of calculating and recalculating total values is also great practice for N’s addition and subtraction skills.

I think Empire versus Rebellion would appeal to kids who like Star Wars and can appreciate a game focused around trying to guess your opponents strategy and puzzling over how best to use your cards. As such, eventhough N does enjoy playing it, I think older kids would get more out of it, say an older 7+. It doesn’t have the easy pick up and play of many of the other card games reviewed here, but it remains a decent enough addition to the shelves because it is specifically a two player game where you’re going head to head and responding to the other player’s moves. A lot of our other games are multiplayer games that get scaled down to 2 player and subsequently don’t have that direct attack element.

Certainly there are other better two player games out there (see Santorini – review coming soon) but I’ve yet to find a better Star Wars themed game for now, although I’m open to suggestions. 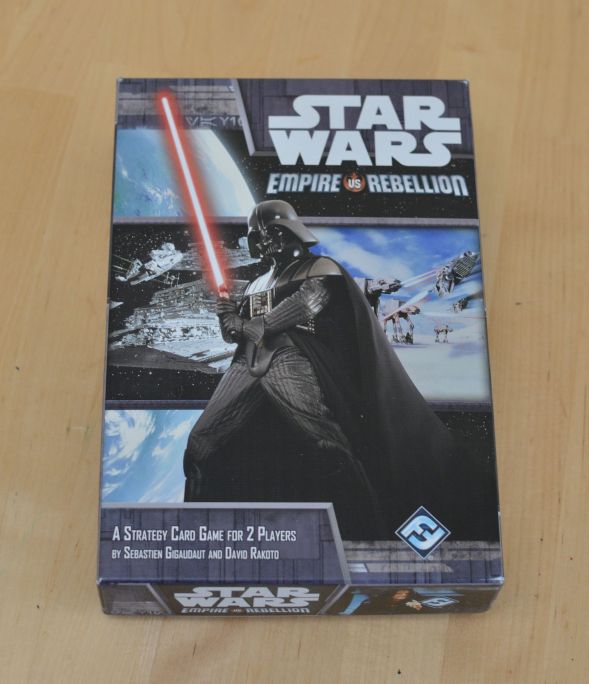