Saboteur is an intriguing little card game of suspicion, bluff and path finding. Everyone is searching for gold through the construction of a shared mine network, but while players may occasionally put an obstacle in the path of a team mate in their attempt to get to the gold first, there’s a saboteur in their midst making sure that no one gets there at all.

This game works suprisingly well with kids from 6+ and is great for mixed age play. It also accommodates up to 10 players which is perfect for bigger gatherings of family and friends.

Set up: The playing area is laid out with the starting ladder (tunnel entrance) on one side and three goal cards placed face down 7 card spaces away. Only one of the goal cards is gold, the other two are just rocks.

At the start of the game each player is dealt a secret character card designating them as either a dwarf or a saboteur. These cards are drawn from a deck consisting of one card more than the number of players so in a 3-5 player game it’s possible that no one will be a saboteur for that round. This means you can’t always assume players are deliberately trying to ruin your plans. While the players (dwarves) potentially get a share of the gold if one of them finds it, the saboteur wins only if no one gets the gold before the end of the game.

To begin, players are dealt a hand of 6 cards (less depending on number of players) that consist of tunnel paths or action cards. On each turn players can either place a piece of tunnel, play an action card, or pass (by discarding a card face down). They then draw a card from the deck and their turn ends.

The action cards consist of broken tools, whole tools, maps or rock falls. The map card is used to peek at the goal cards, and the rock fall is used to remove one of the tunnel cards from the network. However, laying a broken tool in front of another player stops them from laying down tunnels – although they can continue to play action cards or pass. Only fixing a broken tool by laying down a ‘whole’ tool will allow that player to start building tunnels again.

Because building the tunnel network is collaborative, the dwarves are to some extent working together, and all the dwarves can potentially share the treasure as long as someone finds it. But, this game only works if it’s played far more ruthlessly, it is not intended to be a co-op. Whoever finds the gold first gets first choice of the available gold nugget cards (the number of available cards is equal to the number of players). Because gold nugget cards can feature anywhere between 1 to 3 nuggets, there is an advantage in being first. We play up the advantages of being the first dwarf to the gold because if players are breaking each other’s tools in order to get there first, it makes it easier for the saboteur to hide their actions.

The rules also come with a game variation that prevents dwarves with broken tools in front of them claiming a share of the treasure at the end. Instead the remaining dwarves share all the available gold nugget cards between them. We will be switching to these cut throat rules once everyone (including wider family) are up to speed with the gameplay as this rule allow players to catch up on gold nuggets if they were an unsuccesfull saboteur in a previous round and consequently didn’t get any gold. Saboteur plays over three rounds and the winner is the dwarf with the most gold nuggets at the end.

What we love about this game:

There are a lots of similar kids games that revolve around building paths. But what makes Saboteur interesting is the tension created by having a hidden enemy in the midst.

There’s lots of room to plant seeds of doubt, accuse each other, share suspicions and occasionally help each other. It’s this side talk that really brings the laughs and makes it fun to play. I can’t help but try to get N on my side only to reveal my true identity as the saboteur! Or accuse someone else and pummel them with broken tools. It’s a game for mischief.

But the adults don’t have it all their own way. Kids can be notoriously difficult to read, their moves sometimes seem completely illogical or accidentally brilliant.

The game can struggle if someone gets stuck with broken tools and has no action cards to play- this can leave them just drawing cards to try to change their fate unless someone helps them out. I had toyed with the idea of other players assisting someone if they were stuck after 4 draws but I was unanimously voted down! It’s also difficult to win if you’re identified as the saboteur early on (more likely to occur in a 3 player game as there’s less potential players it could be). But adopting the suggested rule variation can counter this by providing an opportunity to increase your share of the gold on a round where you are no longer the saboteur.

Regardless of these issues we are really enjoying playing Saboteur as a family game and we’ve packed it into our summer holiday case because it’s ideal for playing with a bigger crowd of mixed ages. As long as you didn’t give the younger ones the saboteur card, you could even involve ages 4+. While the intricacies of guessing who may be the saboteur will go over their heads, they will be able to lay down cards to help build the tunnel and grasp the concept of breaking or fixing other people’s tools and no doubt find it fun to be included.

Over all Saboteur is an enjoyable, but quite ruthless little family game that adds novelty to path laying games. It’s most fun played in a bigger group but given the ruthless game play it could cause arguments between siblings unless a helpful adult occasionally fixes a few broken tools along the way!

Saboteur was first released in 2004, with an expansion (Saboteur 2) in 2011. The expansion brings in new dwarf roles and actions/goals and introduces playing in teams. It certainly looks interesting enough to warrant another look sometime in the future. 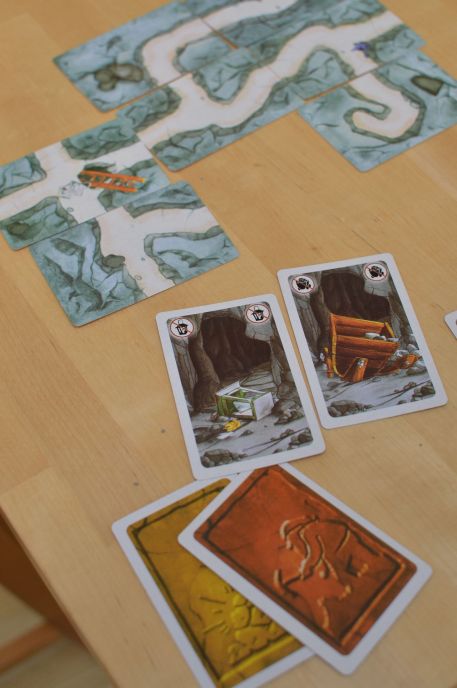 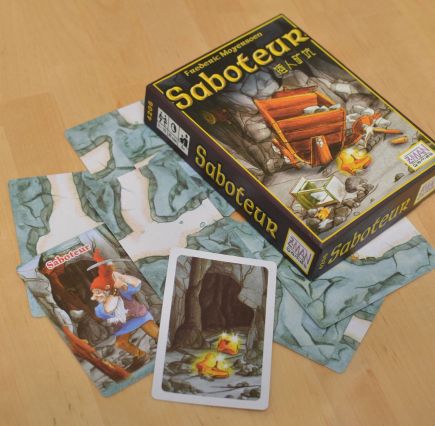 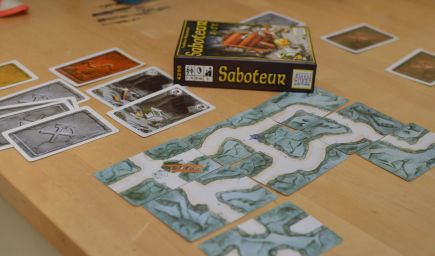